Many emerging markets are at the back of the vaccine queue

The prospect of widespread inoculation is like a shaft of light in the darkness of a very long year. But just how much of the world will that light touch?

Developed nations have been instrumental in producing viable COVID-19 vaccines. Their governments stumped up research grants, subsidised production and agreed forward orders for yet-to-be-approved vaccines. So it’s perhaps no surprise that Western pharmaceutical companies and universities have been behind most of the workable vaccines that have been rolled out round the world. However, this has meant that Western nations snapped up most of the doses immediately.

Due to forward purchases, large developed nations have dibs on enough vaccine doses to cover between 610% of their population (Canada) and 115% (Japan). However, because production simply can’t match the huge demand, it’s expected to take months for the vulnerable and most at risk to receive one of the jabs on offer. These nations are unlikely to be able to vaccinate everyone even if they wanted to. And if they do, it will take a very long time.

Yet they have pre-bought the lion’s share of the global supply. So where does that leave emerging nations? Vietnam bought enough vaccine doses for about 80% of its people, more than any other large developing nation, while Bangladesh had secured zero upfront for its 160 million citizens. The Southeast Asian textiles hub ordered enough of the AstraZeneca/Oxford vaccine from an Indian manufacturer to inoculate 15 million people starting in January.

"This means developing nations are likely to take longer to control the virus and allow households and businesses to live and operate normally than it will take Western nations that have greater access to vaccines."

It is also getting help from the public-private inoculation partnership Gavi, the Vaccine Alliance, which has offered it 68 million doses, protection for a further 34 million Bangladeshis. However, that would still leave more than 110 million citizens susceptible to the virus. The rest of the developing world is in a similar situation, to varying degrees.

This means developing nations are likely to take longer to control the virus and allow households and businesses to live and operate normally than it will take Western nations that have greater access to vaccines. Not only that, but as richer nations shake off the pandemic, the economic recovery will probably start pushing interest rates slightly higher.

The way that works is that investors selling bonds to buy riskier assets, like stocks, would push the price of bonds down and therefore send yields higher. Bond yields are just a tradable market for interest rates at the end of the day. This would increase the borrowing costs of all companies and nations — but those in developing economies still battling the virus may not have the benefit of improved commerce to offset higher interest bills.

One nuance here is that while this scenario doesn’t look good for emerging markets themselves, an economic recovery in the West would mean a boost for export-focused businesses. Take Bangladesh again: if Westerners can flock back to their offices or nights out, they will want some new threads. So Bangladeshi clothing makers would probably get huge orders. That, of course, comes with other risks, given those busy workplaces would cause the virus to spread even faster.

If they take it

"The great irony of the vaccine rollout is that developed world populations, which have greater access to vaccines, are more likely to refuse one"

The great irony of the vaccine rollout is that developed world populations, which have greater access to vaccines, are more likely to refuse one (figure 3). Meanwhile, more people in developing nations that are at the back of the queue have no qualms about getting inoculated.

Perhaps the difference is that poorer nations have greater experience of harsh diseases and viruses and know the power of modern medicine to keep them at bay. We in the West are lucky because we don’t have to think about yellow fever, typhoid and malaria. But if our mistrust of medical science continues to spread, we may have to contend with more than just COVID-19. Diseases we thought we had conquered may return — measles, mumps, rubella and many more besides. 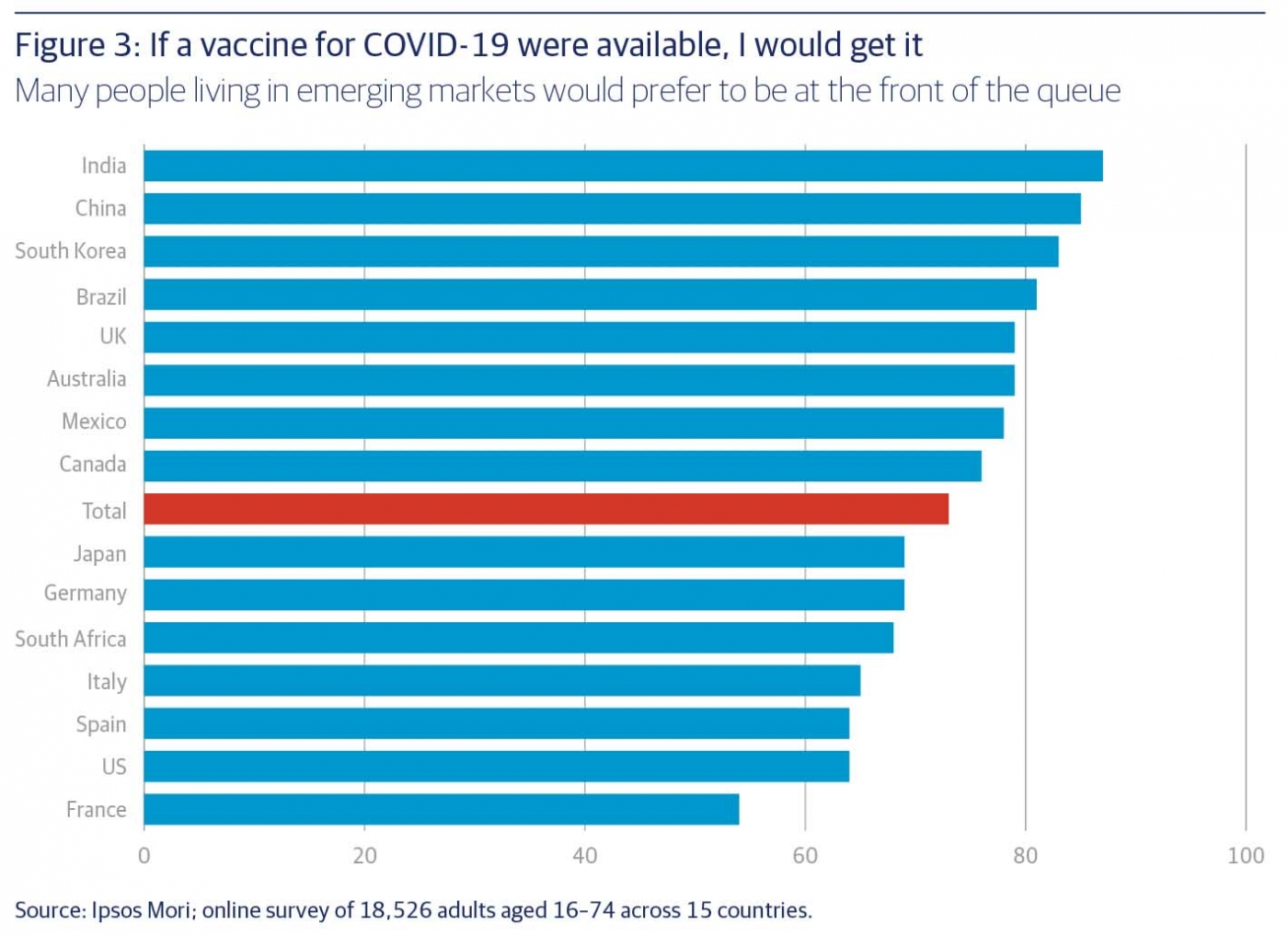